Read my review of Ragnar Relay Madison to Chicago. If you’re not familiar with Ragnar, it is a 200-mile relay race completed by up to 12 runners. This particular event starts in Madison, WI and ends in Chicago, IL and is typically held the second weekend of June.

I was running with Team American Sweathearts, a 9-woman team mostly made up of bloggers and/or members of the F’N Runners. We convened with our drivers on Thursday afternoon to take some thank-you pictures for our sponsors before piling into a conversion van and a mini-van and heading up to Madison, WI. 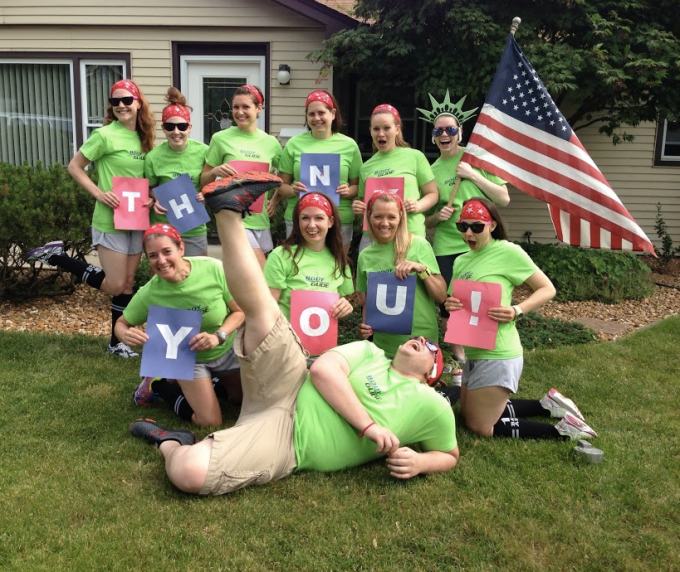 We arrived at our hotel, checked-in, decorated the vans, made sure we had enough safety gear for the night legs (Ragnar has minimum requirements) and then were in bed by about 10:30 for a 4:30am wake-up call.

We stayed at the Holiday Inn Express near the start line, and they were very accommodating and moved up their continental breakfast to 5am. That was very much appreciated!

We had to check-in at the start before 6am for our 7am start time, prove that we had enough safety gear, listen to a safety talk, pick up our bibs and shirts and then kill time in the Ragnar store and taking pictures before it was time for runner #1 to start. Most of us are sporting red pivot shorts from Aspaeris

The Ragnar legs and exchanges are arranged for 12-person teams, because we were doing a 9-person team, most of us had at least one time when we doubled our legs. Van #1 ran legs 1-7. Cheering on Sara and Amanda as they ran by.

I ran leg #6, 9.9 miles, half on the Glacial Drumlin Trail which was pretty – part shade, part open prairie, part by a lake. I think I was running right around lunchtime. Kate took off after me for leg #7, and we found out while she was running that her leg would now include a last-minute detour for almost 4 additional miles. She wasn’t prepared for an 11-mile leg, and Ragnar said we could swap out runners to accomodate. Since the following runner’s leg was under 3 miles, she was able to jump in and pick up the extra. After that, we headed to exchange 12 where van #2 would hand off to van #1. I think we stopped at a gas station along the way and were able to use flushable toilets and wash our hands with soap & water. I started to treasure when those opportunities popped up, LOL.

Exchange #12 was a major exchange, so it was nice to be there for a few hours, eat some real food, check out the other vans and take a nap – maybe for an hour? I napped in the van but quite a few people napped outside in the sun or shade. The joke on Twitter was that it looked like a zombie apocalypse. Another team’s van; Melanie handing off to Suzanne

By the time runner #1 left again, it was “nighttime” hours and we were all in reflective vests (even if you weren’t running, if you got out of your van, you had to be in a reflective vest). Our van ran legs #13-20. I ran legs #18-19 around … 11pm maybe? It was 8.3mi total. It was dark, most of my run was on residential streets or busy main roads (with sidewalks thankfully), although I had just over a mile on a secluded trail, which was a little bit eerie. Also, I wore my Haeleum shirt and no bug spray, and I’m happy to say I have discovered zero bug bites.

I was glad when my nighttime leg was over. After our last runner finished her leg, we headed to exchange 24 (I think) where there were indoor bathrooms and indoor sleeping at the YMCA. By “indoor sleeping” they meant you could roll out your sleeping bag in the gym. I didn’t really have anything to sleep on other than my Soldier Field 10 fleece blanket, so I attempted to sleep in the van. It took me awhile to get comfortable, so I drifted in and out of sleep and maybe got a total of 60 minutes of sleep. When I woke up, I sat up and was greeted by this view: The sunrise over Lake Michigan in Kenosha

Our van started running again shortly after this, we did legs 27-31. My lack of sleep was starting to catch up for me and I was feeling really exhausted, but by that point, there was no way to make up for it, so I tried to make sure I was hydrated and eating enough to prepare for my last leg. Which may have backfired, because I got a side stich during my last leg, but not until the last quarter mile. I ran leg #30 (5.4mi), which went through, um, lovely parts of Waukegan and North Chicago. Actually part of the leg did go past Waukegan harbor, which was pretty (and included some cool lake breezes). I handed off to Kate at exchange 30 and I was done! 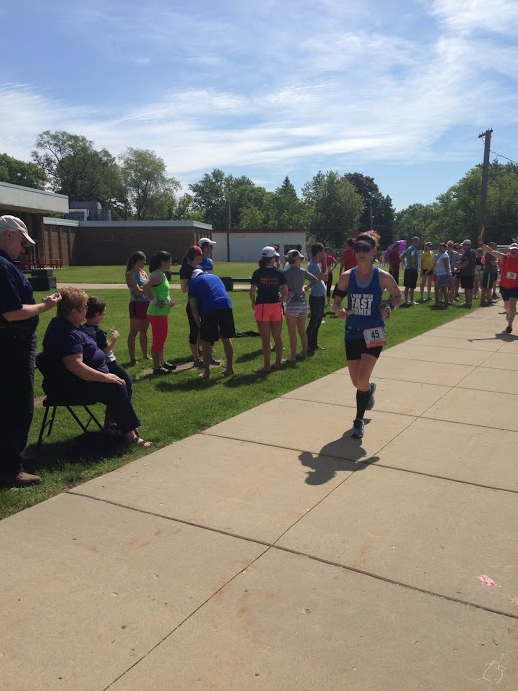 After picking up Kate at exchange 31, we had some time to kill before our last runner would finish at Montrose Beach. We wanted to get real food, but given how stinky and casually dressed we were, our best bet was fast food, so we stopped at a Wendy’s. After we finished eating, I’m pretty sure we could have fallen asleep right there at our tables in Wendy’s, and for a hot minute we debated finding a nearby movie theater, getting tickets for something boring, and sleeping in the cool, dark theater. But instead, we got back in the van and drove to the finish line. I pretty much fell asleep immediately and didn’t wake up until we were close to Montrose … that might have been the best sleep I got during all of Ragnar.

We got to the finish, chilled for a bit and then met up with most of van #2 to wait for Melanie so we could all cross the finish line together around 3:30pm! We ate our team pizzas but no one seemed interested in waiting in line for post-race beers … we were that tired and ready to go home. Especially because we had to drive the vans back to where we all convened on Thursday, and then drive to our homes, which was an hour or more of driving for a couple runners.

I didn’t get home until around 7:30pm. I showered immediately, but instead of going to bed, I headed to the recital for my sis-in-law’s studio, Room to Move. Unfortunately, I missed most of it, but I was able to catch my 3-year-old niece’s number, and wish my oldest bro (who was the sound manager) a happy birthday. And since I missed my post-race beer, I made sure to have a couple of post-race glasses of wine while telling my parents all about Ragnar before going to bed.

Overall, I am SO glad I did this … it was a great event, we really lucked out with the weather, the logistics were handled amazingly well considering all that was involved, every other team/runner we encountered was very encouraging, and I was part of a really awesome team of ladies & gentleman. I would definitely do Ragnar or another relay again someday, and I highly recommend Ragnar to anyone who has ever thought about doing it.

Posts from my team:
Kelly the Culinarian
Running Kellometers
Get to Goal
See Mommy Race